Making a difference with old t-shirts

CINCINNATI -- This is a story about how a bunch of Seton High School students turned hundreds of unwanted T-shirts into blessings for a St. Vincent de Paul food pantry.

And how you can do it, too.

Junior Caroline Klug was among the girls who went. 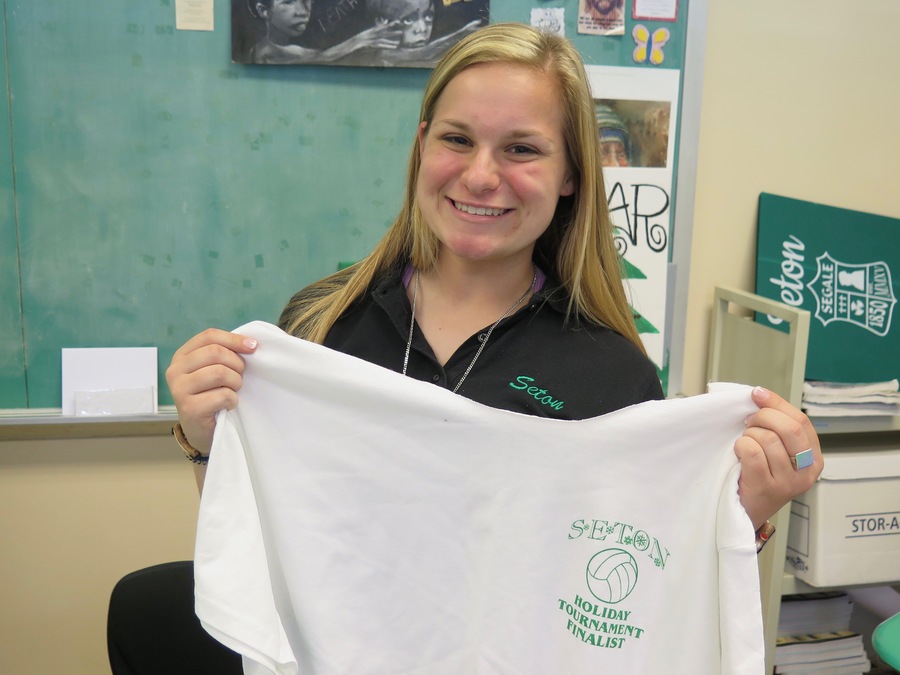 The bags are surprisingly simple to make. There is no sewing involved -- just cutting and tying strips of fabric together.

Making the bags is so easy that Kovacic, Caroline and the other students who went to the conference thought they could be a perfect project for the school’s Lenten Challenge.

More than 300 Seton students participated, and the school ended up making about 350 bags that Kovacic and his students have donated to St. Vincent de Paul for use at its West End food pantry.

“I was really excited,” said Erin Cusick, St. Vincent de Paul’s volunteer coordinator. “We go through easily 1,000 bags a week at the food pantry just with the number of neighbors we see come through. Unfortunately plastic bags don’t hold a lot. You can get maybe two or three cans in a plastic bag.”

The t-shirt bags, on the other hand, can hold a lot more food and are much sturdier than plastic. They also have large enough holes that people can carry them on their shoulders instead of stacking plastic bags on their forearms. 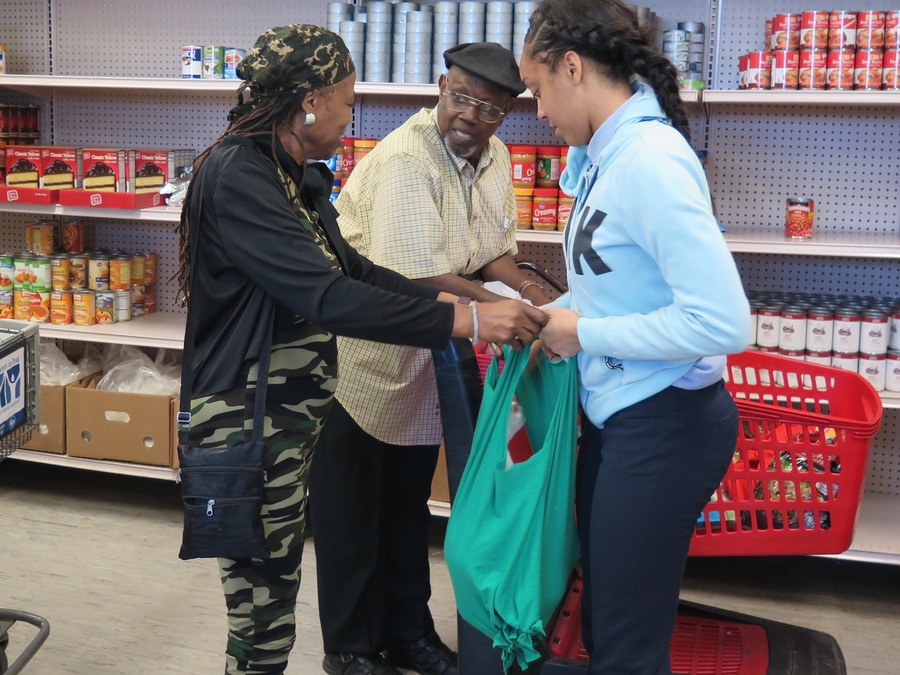 Winetta Booker, left, and her husband, James, center, with a helper from St. Vincent de Paul as they shop in the food pantry.

And all of that is a big help, especially for people who walk or ride the bus to take their food home from the food pantry.

St. Vincent de Paul began handing out two of the reusable T-shirt bags to each person shopping at the food pantry after Seton delivered them, and the bags were a hit right away, Cusick said.

Winetta Booker got a couple earlier this month when she and her husband, James, visited the food pantry. Booker said she liked how colorful the bags are and how the handles make them easy to grab.

“They’re going to be helpful, and I will be using them,” she said. 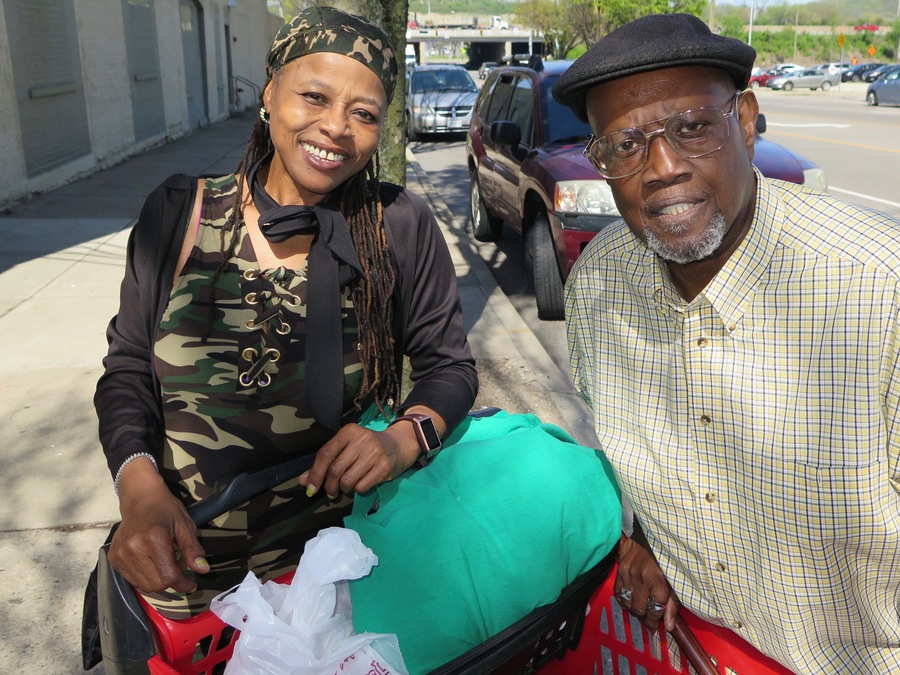 A little time can make a big difference

Back at Seton, students have been making as many bags as they can in classes or groups.

Junior Liz Rolfes didn’t go to Indianapolis last year. But she thought the bags were “really cool” and liked the idea of making them as part of the school’s Lenten Challenge.

“It wasn’t just girls in campus ministry. We were allowed to open it up to girls around the school,” said Liz, 16, a student government house chaplain for the Segale House at Seton. “That’s what made all the impact.”

Both Liz and Caroline said they were surprised that the small act of turning old T-shirts into reusable bags had made such an impact on St. Vincent de Paul and the people that received the bags at the food pantry.

“It’s great to know that we can make that big of a difference in such a small amount of time,” Caroline said.

“I honestly did not think that a bag would make that big of a difference because I didn’t think about it,” Liz added. “When I go to the store, I don’t think about my bags breaking.” 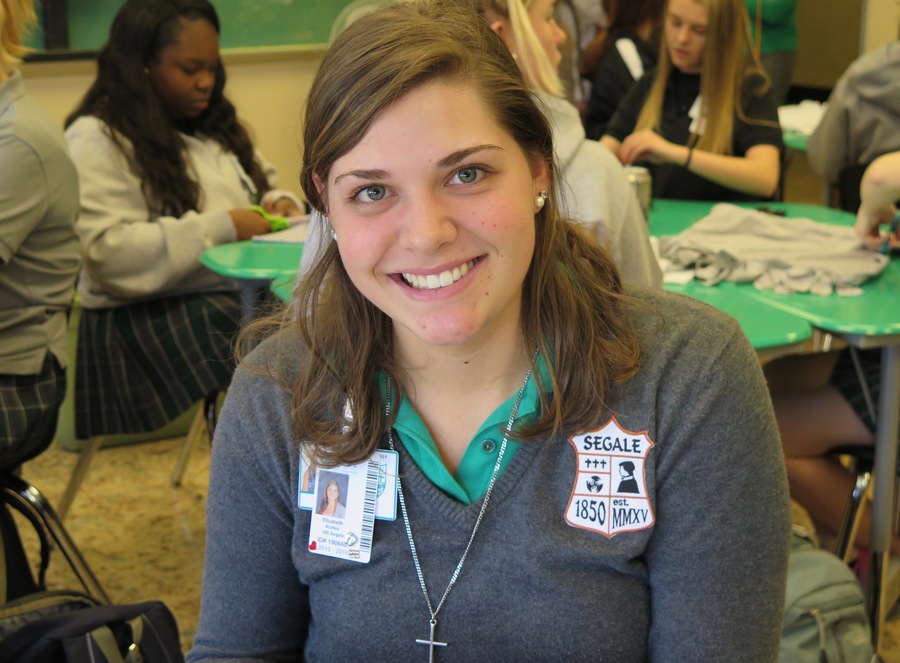 That’s an important part of the lesson, too, Kovacic said.

The Seton students learned more about what it’s like to need to get groceries from a food pantry and how difficult it can be to get that food back home on the bus or on foot.

“We take certain things for granted -- going to the grocery store and having someone bag your groceries for you and walking out to the parking lot and putting them in a car and driving away,” Kovacic said. “Not everyone has that luxury. Some people have to obtain food in a different way. And then once they have that food, it’s not as easy as taking it to your car and transporting it home.”

In that way, learning to make the bags taught the Seton students a lot more than a simple craft project, he said.

“They were educated about the issue and what St. Vincent de Paul does,” he said. “And hopefully they have a better awareness now and an appreciation of their situation and the situation of others and are more likely hopefully to reach out in the future to those in need.”

Cusick said other volunteer groups who have seen the T-shirt bags have offered to make more for St. Vincent de Paul.

The food pantry, she said, will take as many as it can get. 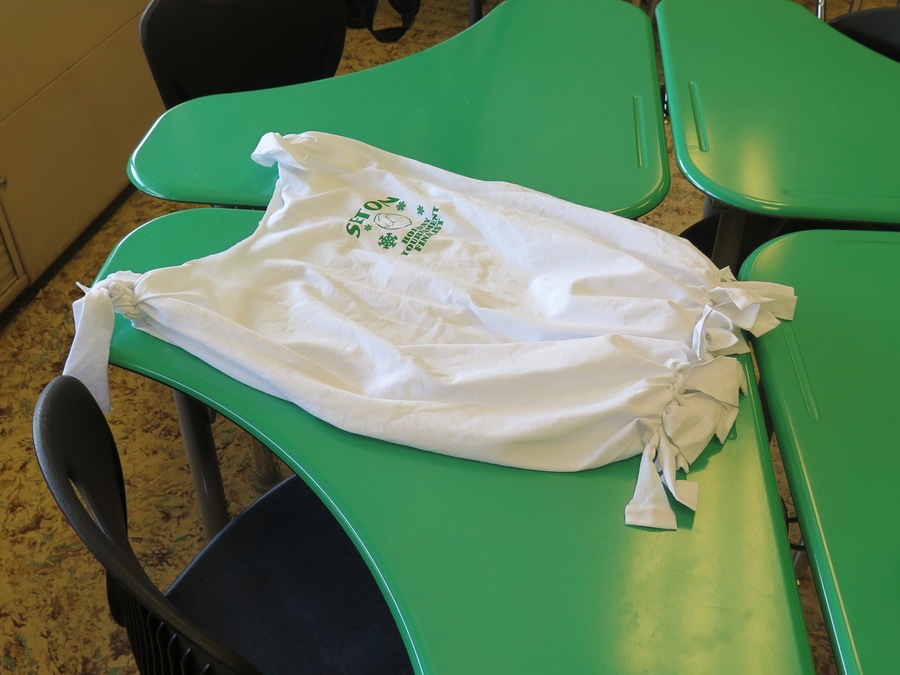